Gigs and what not

It's been really dark and rainy the last week here in Tokyo. I'm happy the weather has cleared up. I've got a lot of exciting things coming up this month and next. Tonight I will be sharing the stage with the great jazz drummer Fukushi Tainaka. We will be playing at No Bird in Ginza with vocalist Eiko Solaris. I will join Fukushi again on Sunday 9/13 with alto saxophonist Fumio Hayashi at Shine in Yono Saitama. On Monday the 14th I join Vocalist Yuzuri at Mugen in Ginza. Then on 9/20 Sunday I will be leading my own group playing original music at Absolute Blue in Ikebukuro. We start at 7:30. I will be hitting the stage with my good friend vocalist Kenneth Andrew at Absolute Blue on September 30th. We will be performing some of my originals and arrangements as well as some rare covers by King Crimson and Gino Vannelli.

In October I'm proud to be a part of the Tokyo Groove Alliance CD release concert. We will be playing at my favorite club Absolute Blue on October 2nd. Show starts at 7:30. TGA has been a band with the same members for about ten years now. There is a certain kind of magic in this group that is rare. I'm lucky to be a part of it.

Also I've been doing a bit of writing for big band and will be performing some of that music on October 4th in Tsukuba with the Sound Gazette big band. Plus look for more music from my progressive metal outfit Ebonvoid.


Get out and support live music folks! 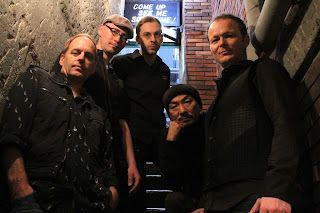 Posted by Jeff Curry Music at 10:20 PM No comments: